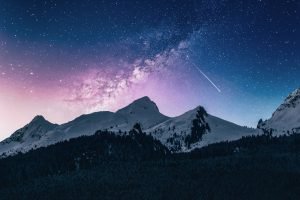 It’s been a long time now since Christmas. And whilst COVID still stays with us, it’s unfortunate that the wonder of celebrating the birth of our Savior fades into the background, if it was ever in the foreground at all. For many Christians, the idea of incarnation has become so reduced it’s no wonder it so constantly gets categorized as if it were some minor event. God became a man and was born of a virgin. “Yeah yeah I know” we say. It doesn’t seem all that special since we’ve been told the same thing a million times over. But there are other aspects of the incarnation that we rarely hear of. There’s so much mystery and paradox.

How in the world can any of this be? There is mystery upon mystery when talking about the incarnation. Yet what I find makes the most sense, is the sudden appearance of Christ. He is born of a virgin. The great artist steps into his own artwork, and from the perspective of those already in the painting who cannot see beyond the frame, it’s as if he appeared out of nowhere.

The virgin birth is also significant in that it shows us that Christ is not born of the seed of Adam but of the Holy Spirit, and yet his earthly father is still a descendant of David. This means that at the foundational level, he is different to us. He isn’t born of the same polluted stock as we are. He is the holy Son of God in human form. What an underrated miracle this is. Let’s not gloss over this precious gem, but hold it up to the light, and marvel in wonder and worship.