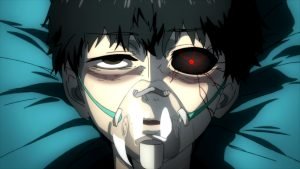 A number of years ago, I was really into an anime called Tokyo Ghoul. It was one of those things that just spoke so deeply to what I was going through; the internal battles, the secrecy, the shame and anguish… All these powerful themes come out so strongly. The show is almost a perfect metaphor for someone struggling with pedophilia.

The story follows Ken Kaneki, a typical student whom, after pressure from his best friend Hideyoshi, decides to ask out a girl he’s had his eye on for quite some time, but never spoken to. Much to Kaneki’s surprise, Rize (his crush) decides to take him up on the offer. At the end of their date, Rize asks Kaneki to walk her home because of all the recent ghoul attacks, which he’s more than happy to. But as they walk down a dark alley, Rize reveals to Kaneki that she’s not who she appears to be. In reality she’s a bloodthirsty ghoul who wants to eat him! (I honestly never saw it coming.) A horrific scene takes place as Kaneki is being tortured and killed but just before the end, some girders from an overhead crane come crashing down – right on top of Kaneki and Rize. While Kaneki is passed out, he hears a man’s voice “He needs her organs to survive”. When he finally awakes in hospital, he notices something strange about all the hospital food. It all tastes like garbage for some reason. Later when he’s recovering at home, there’s a broadcast about the recent attacks. The expert is talking about how a ghoul’s sense of taste works, how they can’t stand normal food because they have different tongues. As Kaneki continues to watch, a creeping fear begins to dawn on him. What if I’m a…? No! It can’t be!

Desperate, he runs over to the food his friend Hideyoshi left for him and tries to eat a burger. He gags. He tries again, and again. He can’t seem to keep it down. Confused and afraid, he falls to the floor and weeps. Missing a book signing and not knowing what to do, he begins wandering the streets – his stomach growling. “People… People… People… Flesh… Girl… Flesh… Children… Flesh… Family… Flesh… Men… Flesh… Boy… Flesh… Flesh. Flesh. FLESH!!” He can’t get it out of his head. There are all these people walking right beside him, and all he can think about is eating them! Feeling bombarded, he runs back to his apartment where he notices his eye; black as night with a red center. “What the hell am I supposed to do now?” he cries.

But his story doesn’t end here. From what I’ve seen, the series continues to follow Kaneki’s journey and the various dilemmas he faces as he straddles the two worlds: the world of the ghouls, and the world of humanity. As an anomaly, he doesn’t really fit into either world making his identity unstable. In spite of his temptations, he still clings onto whatever humanity he has left and resists his more ghoulish instincts. This is what makes his suffering so peculiar. Unlike most other ghouls, he refuses to give in.

The underground world of ghouls is also similar to the underground world of pedophiles. Ghouls are collectively hated and hunted by the greater society, but this doesn’t mean they’re all on the same side. There are ghouls who, honestly see nothing wrong with killing and eating anyone they want. Others, will only eat the homeless. Still others will only eat those who have committed suicide. Unfortunately for ghouls, there is no substitute for human flesh. They can’t even eat pork. (disgusting I know) The only thing from the human world they can consume is coffee, and you can’t make a meal from a mocha, so they’re forced to feed on corpses.

Fortunately for us it’s a different situation, because we do have a substitute we can feed on. We have the Lord Jesus Christ – our Passover lamb.

“Jesus said to them ‘I tell you the truth, unless you eat the flesh of the Son of Man and drink his blood, you have no life in you. Whoever eats my flesh and drinks my blood has eternal life, and I will  raise him up at the last day. For my flesh is real food and my blood is real drink.'” (John 6:53-56)

All I can say is that if you haven’t seen at least the first few episodes of Tokyo Ghoul, I think you really should. For me it was like looking back into the past when I came out to myself. It really helped me frame my experiences and it brought out a lot of bottled up emotions. For this reason I’ll always be thankful to Sui Ishida – the writer of Tokyo Ghoul. I found the show incredibly powerful, and I think you will too.