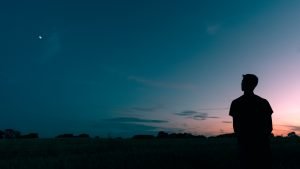 When we follow Jesus our shepherd, the path isn’t always comfortable. As he leads us from hilltop to hilltop, we often pass through valleys of tribulation. Here it seems, the environment is oppressive. The air is heavy, and the fire that once burned in our hearts for Christ our savior is reduced down to a few smouldering embers. Oftentimes, we lose sight of the future pastureland. Before, when we were happily grazing on a sunny hilltop we saw clear as day that there were other pastures up ahead, but now that we’ve gone down into the valley, all we see is the narrow pathway and cliffs streaked with the shadows of trees. Sometimes the only thing that keeps us trudging along is knowing that behind us lies a depleted wasteland.

Yet despite all this, our God hasn’t abandoned us. Even though our stubbornness might get the best of us. Even though unbelief and hardness of heart towards God might set in. Even though we might wander off the pathway altogether. God our shepherd hasn’t abandoned us. He loves us more than we could ever hate him in a moment of weakness. He loves us more than we love ourselves. He loves us more than he loves himself. Look! The scars in his hands are still there. That gaping wound in his side still remains. If the shepherd has laid down his life for the sheep, would he abandon them now because of some sour disposition? Of course not! God isn’t petty like we humans can be. The cross stands taller than our sin. And every thought he has towards us is tender.

You might have read the verse; “thy rod and thy staff, they comfort me.” and been told that the shepherd will sometimes use the staff to break the legs of sheep that go astray. But this is preposterous. Any shepherd that employed this strategy would not only lose his job, but probably be charged with animal cruelty. No our God is not like this. The staff is a comfort because with it, like David, he kills the bears and lions that would otherwise rip open a sheep. See now your heavenly David risen from the dead, standing over Satan, sin, and death and holding up their bleeding heads! “He rends death’s iron chain. He breaks through sin and pain. He shatters hell’s grim thrall. I follow him through all.” Hallelujah!

I don’t know what kinds of trials you may be facing. Oftentimes, people who struggle with pedophilia struggle not just in the immediate present, but also from past wounds that have been inflicted. Maybe you had an alcoholic parent. Maybe you had a sibling with special needs. Maybe you had to move to a different country. Maybe your parents were overly political. Or maybe you found it hard to fit in. Whatever you’re going through. Whatever you’ve gone through. You can be sure that God loves you and that he knows what he is doing. The valley might be dark and deep. But God has not abandoned you.